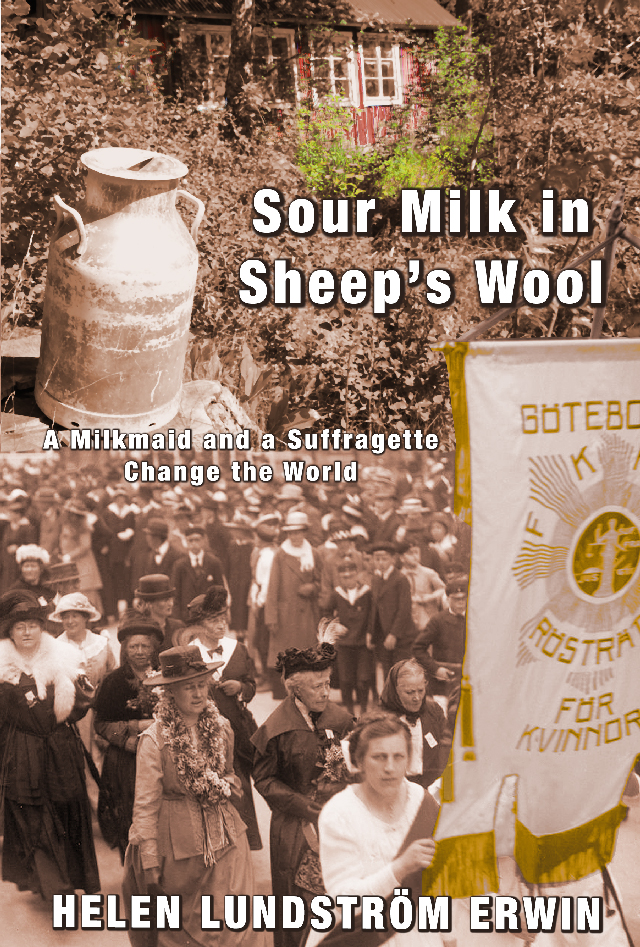 This week I am privileged to have Author Helen Lundström Erwin as a guest. She accepted my invitation to interview her and I thoroughly enjoyed it.

What is the book about?

It’s about Swedish women in the late 19th century and early 20th century as they fought for the right to vote and for the right to make their own choices. You can find information about it here, https://helenerwin.com/#sour-milk-in-sheeps-wool You’ll also find links to my social media accounts on my website and buy links for my other books. Sour Milk in Sheep’s Wool will be released at the end of June this year. If you’re on goodreads, you can add it to your to-read list.

When did you start writing the book?

Several years ago, I spent a lot of time researching Swedish women’s history.

How long did it take you to write it?

It’s hard to say, I started writing Sour Milk in Sheep’s Wool many years ago, then put it down and wrote another historical novel, James’ Journey, and a children’s book, Officer Helga Hedgehog Meets the New Neighbors. During part of this time, I rewrote, tweaked and did more research for Sour Milk in Sheep’s Wool. It’s been to my advantage because Sweden has more sources available online these days, since it was 100 years ago now that women won the right to vote. Swedish women achieved suffrage in 1919 and voted in their first election in 1921.
It’s common to say that “women were given the vote,” but it’s an expression I don’t like. Women fought for their right to vote for several years before they finally won both the right to vote and the right to run for political office.

Where did you get the idea from?

I got the idea to write this story when I did some genealogy research and found that there were things in my family history that no one talked about. Things that were kept hidden because people felt ashamed of the truth. I wanted to understand my foremothers and put myself in their shoes. I believe most people have good reasons for their choices in life. Sometimes circumstances affect these choices, and often things happen that people have no control over that may steer a person into a direction they never planned. To use a cliché, don’t judge someone unless you’ve walked a mile in their shoes.

Were there any parts of the book where you struggled?

Some of Sweden’s suffrage history is complicated, and I struggled a bit to make sure I got this right, and that my characters showed the nuances in this struggle.

Writing is generally very easy for me, especially when I write about history and can draw from historical events.

Are your characters entirely fictitious or have you borrowed from real world people you know?

My main protagonist is based on my great grandmother’s life. There are also a couple of characters who are known historical figures, such as Elise Ottesen-Jensen, the co-founder of International Planned Parenthood Federation, and Frida Stéenhoff, who was a Swedish author and suffragist.

We all know how important it is for writers to read. Are there any particular authors that have influenced how you write and, if so, how have they influenced you?

I love writers who take the time to research their time periods well and who include interesting historical details in their stories. I also appreciate when authors understand that people in the past didn’t have the same attitudes and understanding as we do, since they didn’t have access to the same information and knowledge as us. People were products of their times and were influenced by the discourse they were exposed to, just as we are today.
I’m very impressed with Lawrence Hill, Geraldine Brooks, Margaret George, and Judith Thomson who all write very well and research their history thoroughly.

Do you have a target reader?

For my children’s books, my target is teaching children about diversity, different cultures, and about being open and interested in people who aren’t the same as you.

Do you have a writing process? If so can you please describe it?

I draw from historical events or time periods and just let it come. I write a lot at first. Then I go back and double check historical facts, rewrite and tweak. Sometimes I’ve written a scene about something that didn’t yet exist in my time period, and then I have to research on it, and rewrite so it fits. It can send me down a long road of interesting historical facts that I can then expand on.

Do you outline? If so, do you do so extensively or just chapter headings and a couple of sentences?

No, I just write. But I do have a sense of the historical details, when they happened and what was going around in the world at that time, so in that sense there is an outline.

Do you edit as you go or wait until you’ve finished?

Both, but mostly afterwards, and during my rewriting period.

Did you hire a professional editor?

Do you listen to music while you write? If yes, what gets the fingers tapping?

Yes sometimes, if I’m writing an emotional scene, then I might pick something that sound very epic, especially from movies.

Where did you grow up?

I grew up in Helsingborg, Sweden.

Where do you live now?

I live in New York City, and have been living here for 30 years, this fall.

What would you like readers to know about you?

I love to run. It’s my me-time and when I feel the best about myself, when I feel strong and like I can do anything, especially if I have the chance to run in nature. I love food and I enjoy cooking.

What are you working on now?

I’m working on another historical novel which is also set in Sweden and set in the 17th and 18th centuries. I’ve also started to work on a cookbook, and I have ideas for a sequel for my children’s book Officer Helga Hedgehog Meets the New Neighbors.

What advice would you give aspiring authors?

Believe in yourself, write, rewrite, edit, rewrite and never give up on your writing, it’s your art. You’re a writer, claim it!

<< Back to News Index